skip to main | skip to sidebar

After a brief hiatus of ten months I thought I would post another blog. When I first launched this page it was my intention to actually write in the character of Clare In The Community, but truth be told I decided that if I came up with anything funny I would put it in the strip or radio script, rather than waste it for free on a blog. No offence, millions of readers in cyberspace.
Anyway, the recordings for Clare In The Community series 7 have just finished and were well received, mostly successful and free from too much backstage/recording booth trauma. I even succeeded in abstaining from alcohol throughout the whole process.
Anyway, Clare series 7 launches on Friday 23 September at 11.30am, on Radio 4. 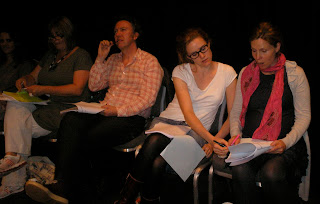 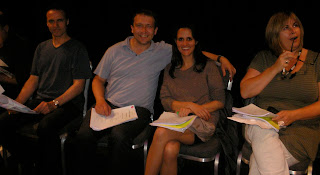 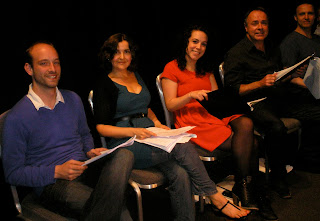 Here are some photos of the cast pretending to be interested during rehearsals. The photos are my own, and therefore crap.
Posted by harry venning at 03:47

harry venning
I am a cartoonist, illustrator, and writer. Amongst the many wonderful gifts I have given the world are Hamlet The Pig in The Stage, Clare In The Community in The Guardian and on BBC Radio 4, and theRadio 4 sitcom Sneakiepeeks, although the world didn't really appreciate that particular gift and effectively gave it back after one series. I will do almost anything for money.